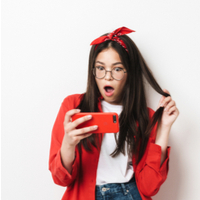 A tooth whitening advert, which was posted on Instagram, has sent social media users wild. The image posted by HiSmile features a woman with an abnormal number of teeth.

HiSmile posted the picture, which from a distance, appears to be a healthy set of bright white teeth, last week, only to receive hundreds of comments about the number of teeth on display. The image features two rows of teeth, but each one contains double the normal number. The average adult has 32 teeth, but the advert shows a woman with around 60 teeth.

Having used the image to promote whitening services, HiSmile’s post attracted more than 10,000 comments, with many people asking what had happened and whether there was an editing mistake, which hadn’t been spotted prior to posting. Many people remarked that they wouldn’t be turning to HiSmile if the results were numerous extra teeth, and several users tagged friends so that they could see the rather bizarre image.

This new viral dental image comes in the wake of another social media sensation, which occurred when 18-year-old Ferne Rawson posted a photo of some £40 veneers she had ordered online along with a brief description in which she claimed to look like Mr Potato Head.

This entry was posted on Wednesday, August 14th, 2019 at 4:45 pm and is filed under General. Both comments and pings are currently closed.