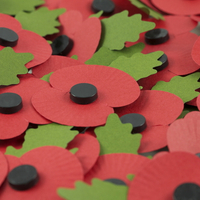 A dental team from Penrith has plenty to smile about after raising £1,000 for charity.

After 12 months of fundraising, staff from Ghyllmount Dental donated £1,000 to the Royal British Legion, a charity that provides assistance and support for military veterans and their families.

Throughout 2019, the team ran a series of events and also collected money through a book corner and the sale of merchandise from the Royal British Legion. Among the most popular events were the number square competitions, with some incredible prizes on offer. Patients and local residents got behind the fundraising drive, and with prizes including tickets to see and meet Michael Ball and Alfie Boe on offer, it’s no surprise the total started to rise. The meet and greet tickets were won by Pamela Armstrong, who is looking forward to the concert in February.

The practice team chooses a charity each year, and the Royal British Legion was selected for 2019. Fundraising gives everyone the chance to support a worthy cause and to encourage interaction and engagement between the clinic staff and the local community. Activities and events are always well-supported, and everyone takes satisfaction from being able to present an amazing charity like the Royal British Legion with a cheque at the end of the year. The team was delighted with the final sum and thanked all of those who generously donated.

This entry was posted on Tuesday, February 4th, 2020 at 9:28 am and is filed under Charity. Both comments and pings are currently closed.