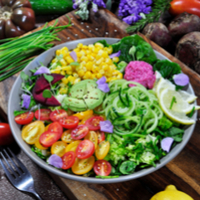 A new study suggests that a plant-based diet could reduce the severity of gum disease symptoms.

Researchers based in Germany analysed the impact of a nutrient-rich, plant-based diet on a group of people with gingivitis. The small study, which involved a group of 30 people, revealed a positive response to an anti-inflammatory diet that was made up of fruit, vegetables, fish and nuts. Half of the group followed this eating plan and the other half was a control group. The group that was put on the diet was also given vitamin D supplements.

During the trial, both groups were asked not to floss or use inter-dental brushes, and after a period of 8 weeks, researchers analysed blood samples and plaque levels. The team found that the group that had switched to the anti-inflammatory diet had lost weight and increased their vitamin D levels, as well as enjoying significant reductions in gum bleeding. The findings of the study have been published in the Journal of Clinical Periodontology.

Lead author, Johan P Woelber, from the University of Freiburg, suggested that the study should encourage dental teams to ask questions about dietary habits and to urge patients to adopt healthy eating plans to reduce the risk of gum disease and keep teeth and gums healthy. A poor diet is linked to gum inflammation, and a simple conversation about ways to improve the diet could make all the difference.

This entry was posted on Wednesday, April 10th, 2019 at 4:50 pm and is filed under Gum disease. Both comments and pings are currently closed.