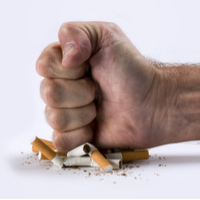 New research suggests that improved health is the main reason most smokers in the UK try and quit.
The findings of a survey carried out by the Oral Health Foundation revealed that two-thirds of smokers are keen to quit to improve their health and reduce the risk of illnesses like lung cancer, emphysema and heart disease. This equates to more than double the number of smokers who want to give up for financial reasons. The charity surveyed a total of 500 smokers.
New figures suggest that in the year ahead, around 350,000 people will try and quit smoking. This will contribute to the lowest smoking rates on record.
Dr Nigel Carter OBE, chief executive of the Oral Health Foundation, said that he was “delighted” with the study findings, which suggest that people are becoming more health-conscious. The number of smokers is decreasing year on year, and more and more people are succeeding in their bid to quit for good. Giving up smoking isn’t easy, and it requires willpower, motivation and commitment, but it can be done, especially with help from doctors, dentists, friends, colleagues and family members.
Research shows that there are now 3 million fewer smokers in the UK than there were just 10 years ago. Despite the decline in rates of smoking, smoking is still directly linked to around 500,000 hospital admissions and approximately 80,000 deaths per year in England alone and the goal for health chiefs is to continue the decline.
While the majority of people cited their health as the main motivation for giving up, 28 percent said that cost was a factor. Cigarette prices have increased by 91% in the last decade, and the average smoker can save up to £250 per month by quitting.

This entry was posted on Friday, January 18th, 2019 at 9:57 am and is filed under Oral health. Both comments and pings are currently closed.