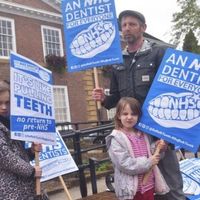 Mydentist has confirmed that its Hadleigh practice will remain open following speculation about the future of the clinic online.

Mydentist, one of the largest dental chains in England, has closed some dental practices in recent months but insisted that the Hadleigh clinic in Suffolk would continue to provide dental care for local patients. There had been reports on social media suggesting that the practice was going to close, which would further deepen an access crisis in the area.

Suffolk is one of the worst-affected areas in the country in terms of dental access, with hundreds of patients reporting issues getting appointments and some placed on waiting lists that could see them waiting for years to see a dentist. With complaints becoming more commonplace and pressure on NHS dental services mounting, there was widespread concern when reports of a closure surfaced on social media.

The operators of the Meadows Way practice confirmed that the practice was not closing and suggested that if it is sold, the premises will be passed on to another dental provider. Mydentist pledged to keep patients informed of any changes in provision.

News of a potential closure came after another mydentist clinic, the only practice remaining in Leiston, shut in 2021, leaving residents with a choice between travelling to see a dentist and going private locally. The situation is so bad in Suffolk that a campaign group has launched.

Toothless in Suffolk is appealing for urgent changes to improve access to NHS dental care. There have been organised marches and the group has been working with dentists, residents and local and national government figures to try to ensure that local people can see a dentist without having to wait or pay private dental fees.

The main issue facing dental providers in the region is a shortage of staff. Practices are also still operating at a reduced capacity due to the Covid-19 pandemic.

This entry was posted on Tuesday, January 11th, 2022 at 9:19 am and is filed under NHS Dentistry. Both comments and pings are currently closed.