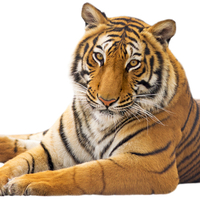 Fabi, an 11-year old Sumatran tiger who lives at Paignton Zoo, got a visit from the dentist recently.
The imposing, majestic animal required root canal treatment after fracturing some of the lower canine teeth. To carry out the procedure, keepers worked with veterinary dentist, Matthew Oxford to create a makeshift dental surgery in the tiger den. Once the team had administered the anaesthetic and Fabi was sound asleep, Mr Oxford set about treating the teeth, using X-rays for guidance. Further investigations revealed that a number of Fabi’s lower canines were damaged, and infection had spread to the pulp tissue. Abscesses had formed in the tooth roots, so it was crucial to intervene quickly.
The procedure, much like a human root canal treatment, involved removing the decayed pulp tissue and cleaning and filling the root canals. Throughout the operation, Fabi was monitored closely and he was fitted with a breathing mask. He had a duvet and an electric blanket to keep him warm, and his paws were wrapped in bubble wrap to prevent them from getting cold.
After the procedure, Fabi was left to rest and recover and within around 15 minutes, he was sitting up in his pen. Vet teams continued to keep an eye on him, and by the next day, he was back to his old lively self.

This entry was posted on Wednesday, January 9th, 2019 at 10:40 am and is filed under Animal Dentistry. Both comments and pings are currently closed.