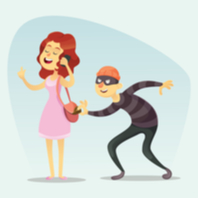 Police officers in Essex are appealing for information after a thief posing as a dental patient stole an iPhone from a receptionist at Leigh Dental Care.

The 51-year-old receptionist only realised what had happened after the man, who had approached the desk asking for information about getting an appointment for toothache, had left the surgery and made off with her mobile. The man, whose first language wasn’t English, had stolen the phone while asking the receptionist for advice about registering with the practice. When prompted to write down his name and contact details, the thief had used a magazine to cover the phone and slid it off the desk while the receptionist was handling his query.

The phone is an iPhone XR, which has a significant street value, but more importantly for the victim, sentimental importance. The phone contained images of the receptionist’s father, who sadly passed away a few years ago. Thankfully, the images had been backed up, so the victim now has access to the treasured photographs, but there has been no further information about the whereabouts of the stolen phone.

Having realised what had happened, the receptionist tried to pursue the man, but only saw him make off in a silver Audi A4, which had been waiting for him outside to make a speedy escape. The car drove the wrong way down a one-way street and almost caused a collision, with an oncoming vehicle forced to make an emergency stop to avoid a crash.

Anyone who has any information about the incident, or the vehicle spotted outside the practice is encouraged to contact Essex Police on 101.

This entry was posted on Tuesday, February 4th, 2020 at 4:31 pm and is filed under Crime. Both comments and pings are currently closed.