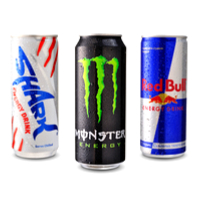 An energy drink addict has spoken out in the press and shared images of his teeth to warn others about the impact of consuming sugary drinks on a regular basis.

Vinnie Pyner, 21, started drinking Monster energy drinks to stay awake at college, but his consumption increased rapidly, and soon, he was drinking up to six super-sized cans per day. Without even thinking about it, Vinnie was drinking the sugary liquid with breakfast, lunch and dinner and topping up between meals. Despite brushing his teeth twice a day, Vinnie’s mouth soon started to show signs of severe damage, and when biting on an apple, his four front teeth crumbled.

After a period of seven months of drinking up to 45 cans per week, Vinnie decided to go cold turkey, but the damage to his teeth was already done. He was too embarrassed to go back to college but mustered up the courage to see his dentist, who said that every single tooth was rotten. Vinnie now needs 24 fillings plus partial dentures to restore his smile.

Vinnie, from Margate, wanted to speak out to warn other people about the dangers of drinking energy drinks. What started as a means of preventing stress at college soon became an addiction, which had profound implications for Vinnie’s health and confidence. Vinnie couldn’t face seeing people every day, he dropped out of college, and now he

struggles to leave the house without feeling self-conscious. He hopes that his story might resonate with others and, hopefully, prevent people finding themselves in a similar situation.

This entry was posted on Monday, February 18th, 2019 at 5:00 pm and is filed under Dentures, General, Oral health. Both comments and pings are currently closed.