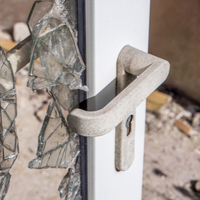 A dental surgery in Dundee was forced to cancel and postpone appointments, after thieves wreaked havoc, trashing treatment rooms and damaging the computer system.

Thieves broke into The White Pearl dental surgery on Tudhope Terrace just before 11pm on Wednesday 25th September. Gaining access to the premises through the window of the ground floor toilet, the burglars cut through a metal bar to open the window and reach the reception area and treatment rooms. During the time spent at the practice, they damaged computers and the central server, which was only installed a week prior to the incident, and they upturned treatment rooms. The surgery was a mess when owner Dr Rami Sarraf arrived, and there was no choice but to cancel the next day’s appointments.

Dr Sarraf said that he was “disgusted” and described the break-in as “heartless,” as patients will now suffer. There has been widespread damage, and the practice had to close to allow forensic experts to investigate and collect evidence. The fact that the robbers broke through a metal bar to open window suggests that they had tools with them.

Dr Sarraf was alerted by a neighbour and then the alarm company, but the thieves had already made off with cash and laptops.

Following the incident, Dr Sarraf liaised with his IT team and fortunately, the systems were up and running again the day after, which enabled the practice to open again with just one day’s appointments lost.

The police are now looking at the evidence and they are asking anyone who knows anything about the robbery to get in touch.

This entry was posted on Monday, September 30th, 2019 at 12:48 pm and is filed under General. Both comments and pings are currently closed.