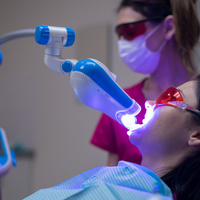 Experts from the British Dental Association have described illegal tooth whitening as a ‘health gamble.’
As more and more people look for ways to brighten their smiles and interest in whitening products increases, the association has stepped up its campaign to raise awareness of the potential risks of illegal whitening and to encourage people who do want radiant smiles to seek professional dental advice. Whitening is a dental procedure, and therefore, can only be legally provided by trained, qualified dental professionals who are registered with the General Dental Council. The BDA has suggested that anyone who opts to visit a non-dentist for treatment is “gambling with their health.”
In recent years, the GDC has clamped down on illegal whitening, but research suggests that many consumers are unaware that it is illegal to administer whitening services without the relevant expertise and qualifications. Treatments offered by beauty salons, for example, may seem appealing due to low costs, but they are actually illegal.
The BDA spoke out after a ruling at Belfast Magistrate’s Court, which saw Samuel Irvine Madine convicted of using and supplying illegal whitening products. The conviction comes 3 years after Mr Madine was prosecuted for impersonating a dentist and providing illegal whitening treatment. Investigations revealed that the products Mr Madine was selling contained alarmingly high levels of hydrogen peroxide. The BDA said that using such products was tantamount to cleaning the teeth with bleach.
The case against Mr Madine has now been adjourned and sentencing will take place on the 4th June.

This entry was posted on Tuesday, May 7th, 2019 at 10:12 am and is filed under teeth whitening. Both comments and pings are currently closed.