Botox on a budget: snake venom? 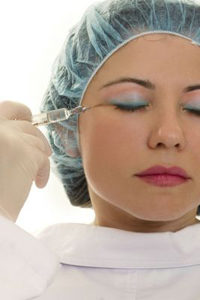 A new product has hit the market, claiming to block the nerve signals that cause wrinkles. The good news: it costs £6 per tube. The not-so-good news: it contains a synthetic form of the poison of an Asian temple viper snake.

Lacura Wrinkle Stop, which will be stocked by Aldi from next week, contains Syn-Ake, which behaves like the snake’s paralysing venom – but obviously on a smaller scale! Celebrities fork out up to £60 a pot for other incarnations of Syn-Ake, so £6 is a bargain.

And while tests have found that applying the cream twice daily for four weeks may lead to a reduction of the appearance of wrinkles of up to 52 percent, it remains to be seen if snake venom will take a bite out of the Botox market.

This entry was posted on Friday, April 10th, 2009 at 11:26 am and is filed under General. Both comments and pings are currently closed.