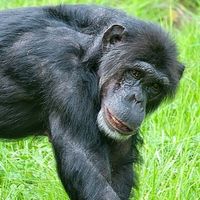 Barbie, a 43-year-old chimpanzee who lives at Dudley Zoo and Castle, has received a visit from the dentist.

Keepers noticed that the chimp’s gums were swollen and red above two of her top teeth and started monitoring her closely. They liaised with the zoo’s veterinary team and sent photographs to a specialist dentist, who decided that it would be best to extract the affected teeth.

Barbie underwent rigorous preparations for the procedure to ensure that she felt as relaxed as possible. Keepers train the chimpanzees to present their shoulders for injections, but the team wanted to anaesthetise her with a jab in her thigh for the extraction, so they started training the seven female chimps to show their legs in exchange for grapes and raisins.

The group picked up the new command within a week and keepers also started getting Barbie used to being separated and she spent time in her den alone before the procedure to make her feel more comfortable and minimise stress. The chimps were also treated with a mock needle so that they would be familiar with the sensation of having an injection if they need treatment.

By the day of Barbie’s dental surgery, everything was in place and her training worked perfectly. She had her injection without the need for any intervention from the vets and headed into her den alone without any problems. She was then transferred to the operating table once the anaesthetic had taken effect and the vet team started work.

Richard Brown, curator, explained that tooth extraction in chimpanzees is very similar to human tooth removal and confirmed that the operation had gone smoothly. Barbie underwent a full dental and general health check and passed with flying colours. She was monitored as she came around from the anaesthetic and was welcomed back by the other chimps with open arms.

This entry was posted on Friday, January 7th, 2022 at 9:36 am and is filed under Animal Dentistry. Both comments and pings are currently closed.