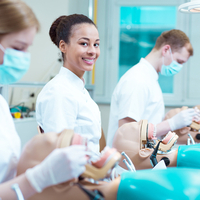 Medicine subjects are proving to be popular with 36% of Black, Asian and minority ethnic students taking up courses. This is up 20% from 2016/17.

Law degrees come in at a close second with 34%.

On the other hand, veterinary science and agriculture both have less than 10% of students applying to study the subjects.

Although students are keen to apply for medicine courses, a recent report revealed that BAME students are less likely to achieve above a 2:2.

It also showed that BAME students often struggle with finding work after their degree. White students who graduated in 2018 with a first or 2:1 were 13% more likely to do so than those with BAME backgrounds.

Higher education institutions welcome the influx of BAME students, but have acknowledged there’s more they could do to support them during their time there.

It is now compulsory for universities to publish data on their students, including background, ethnicity and gender. This was enforced by the government who want universities to analyse their admissions and make changes to the areas in which they’re lacking.

Over the past decade, there’s also been an increase in BAME students taking up apprenticeships of up to 4%.

This entry was posted on Thursday, October 10th, 2019 at 10:00 am and is filed under 'Invisible' braces. Both comments and pings are currently closed.