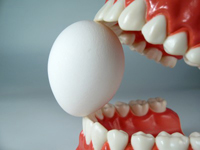 Representatives from 1st Dental have announced that they are confident that they can still be a market leader in the dental laboratory industry, despite serious financial worries.

Recently, the bridge and crown making company entered into administration but was bought by Richard Hughes, from investment group, Zeus Group, last week. The firm was forced into administration last month after pressure from creditors, including HM Revenue and Customs, threatened the future of the firm.

A cash injection from Richard Hughes has given the company new hope and managing director, Nigel Spring, said the firm was optimistic it could turn the situation around and become a market leader once again. The Harrogate-based firm currently has a 5 percent share of dental laboratories in the UK and competes with smaller independent laboratories across the country.

Mr Spring said that the future of the dental industry remained uncertain; however, he stressed that the company was optimistic and expressed concern for smaller laboratory firms, as they were more vulnerable to financial hardship. The recession had caused many private patients to turn to NHS care and this has affected the revenue of private companies; for the moment, it looks like the NHS will continue to dominate; however, if the economic situation picks up, the number of patients choosing to go private could start to increase steadily.

This entry was posted on Monday, October 4th, 2010 at 10:46 am and is filed under General. Both comments and pings are currently closed.