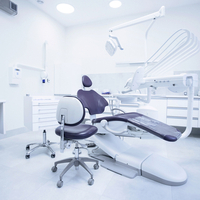 Planning officers in Wrexham have approved a proposal to extend a dental practice in Ruabon Road.

The plans, which were submitted at the beginning of 2019, include proposals to change the use of the ground and first floors to extend the existing practice and add a laboratory.

After careful consideration, the council has now approved the plans, but they have not been welcomed by everyone. The highways department initially raised concerns about street parking, which was already in high demand in the immediate area.

Despite the fact that there were reservations about parking, planning officers, including David Williams, felt that the project should be approved due to the proximity of a bus stop and excellent local public transport links. At a meeting on Monday 3rd June, Mr Williams suggested that street parking in the area was more of a problem in the evenings, when the surgery would be closed. By the time residents returned from work, they would be able to use the spaces vacated by staff and patients. Mr Williams also argued that many people would be able to walk to the practice given the population density in the surrounding streets.

This entry was posted on Monday, June 10th, 2019 at 4:57 pm and is filed under New Dental Clinic. Both comments and pings are currently closed.