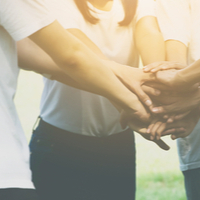 A dental team from Woodford Green has raised thousands of pounds for charity after completing a fun-filled It’s a Knockout competition.

Staff from Improve Your Smile took on teams from other businesses and organisations to tackle an assault course inspired by the famous game show on Sunday 28th July. Participating teams tackled gunge, slippery slides and a series of imposing inflatable obstacles to raise money for Haven House. The event was celebrated by a host of teams all over the country, with the staff from Improve Your Smile taking on six other teams based in the local area. In total, there are more than a hundred members of the Haven House 100 club, which regularly fundraise for the charity.

The practice’s marketing manager, Amanda Green, said that the competition was great fun, and everyone really got involved in the antics. The event was an opportunity to meet people from other local businesses and also to support a cause that means a lot to everyone that took part.

Haven House is a children’s hospice, which provides care for young people with terminal illnesses, as well as offering support and guidance for family and close friends. Less than 20% of the charity’s funds come from the NHS, and the cause relies heavily on donations, especially from the 100 Club. Community fundraising executive, Amy Bramble, thanked everyone for their generous donations and said that the ‘It’s a Knockout’ event really encapsulated what supporting the cause is all about

Improve Your Smile raised more than £2,200 and contributed to a collective total of over £6,700 across the seven teams. This sum will make a huge difference to those who rely on the hospice for treatment, therapy, and emotional and practical support.

This entry was posted on Tuesday, August 13th, 2019 at 10:20 am and is filed under Charity. Both comments and pings are currently closed.