Tiger that Came for Teeth 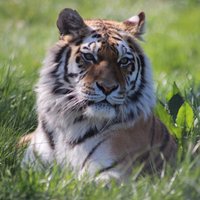 Kuzma, a 10-year-old Siberian tiger, has undergone dental treatment in Liverpool. The beautiful big cat is one of Knowsley Safari Park’s most popular residents.

A team of veterinary experts was gathered for the procedure after a routine dental examination flagged up a number of issues. X-rays confirmed that Kuzma had a damaged root in one of his canine teeth, which could have posed serious risks to his health if left untreated. Once the problem had been spotted, the team started to prepare for the procedure, which required careful planning, due to the size and weight of the animal.

Kuzma weighs around 30 stone, and the roots of tiger teeth go much deeper than human teeth. Vet, Jen Quayle, who was involved in treating Kuzma, described the canine teeth as icebergs. You only see the tip of the tooth, and the root is nestled deep inside the bone tissue.

During the operation to remove the affected tooth, which took over four hours, Kuzma was anaesthetised and monitored carefully. He was wrapped in a duvet and bubble wrap, and mittens were placed on his paws to keep him warm. The team comprised two specialist veterinary dentists, an anaesthetist, a radiographer, a veterinary nurse and eight of the park’s carnivore keepers.

After his treatment, Kuzma was cared for by the vet and keeper teams, and he has since recovered fully. He has responded well to the procedure and is eating normally.

Kuzma moved to Knowsley in summer last year and he is one of three Siberian tigers currently living at the Merseyside park. Keepers are hoping that the tigers will breed and visitors will be able to see adorable stripy cubs bounding around the enclosure in the future.

This entry was posted on Monday, January 13th, 2020 at 12:28 pm and is filed under Animal Dentistry. Both comments and pings are currently closed.