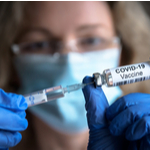 A man has been charged after breaking into a dental practice in Washington and stealing Covid-19 vaccines.

The un-named 30-year-old was charged with burglary after gaining entry to North Harbor Dentistry in Purdey, Seattle. The man stole 100 vials of the Johnson & Johnson Covid-19 vaccine in addition to $100,000 worth of dental equipment and a vial of Botox.

The vials of the vaccine, which is a single-shot injection manufactured by Janssen, were found discarded in a bush near the dental practice following the incident. They were unusable due to being left out of the refrigerator for too long.

Security footage captured at the scene was used in evidence and the man was charged after being arrested in connection with another burglary approximately half a mile away from the surgery. It is believed the thief had broken into a hair and beauty salon, stealing $50,000 worth of equipment and supplies.

A representative from Pierce County Sheriff’s Office confirmed that the suspect, who has not been named, has been charged with two counts of second-degree burglary. The case will now be forwarded to the Pierce County Prosecuting Attorney’s Office.

This is not the first instance of vials of vaccines being stolen in the US. Last month, a burglar stole ten vials of the Johnson & Johnson vaccine from a primary care centre in Southwest Florida. Vaccines are currently available to all US adult citizens free of charge.

This entry was posted on Thursday, May 13th, 2021 at 9:46 am and is filed under Coronavirus, Dentistry abroad. Both comments and pings are currently closed.