The coolest on the catwalk: Cara the tiger shows off new gold fang 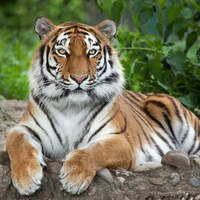 A tiger that was rescued from a house in Italy is sporting a brand new gold fang after undergoing treatment provided by a team of international dental experts.

Cara, a 6-year-old tiger, was saved from a house in Mugnano in 2013, and she has since settled at the Tierart Tiger Station in Massweiler, Germany. Over the years, Cara’s health has been monitored carefully and she has been doing well, but recently, specialist dentists were drafted in to carry out dental checks. The team spotted noticeable grooves in the front tooth, and set about designing a robust crown, which would enable the majestic big cat to eat properly and reduce the risk of infection and further damage. If the tooth had been left, there is a good chance that it could have broken completely, leaving Cara struggling to eat.

During the treatment process, Cara underwent two procedures. At the end of August, dentists created a custom mould of the tooth, and in September, the shiny new crown, which is made from gold, was fitted. Florian Eiserlo, a biologist, explained that Cara’s damaged tooth had to be cleaned thoroughly and trimmed and shaped before the crown was applied and secured. The adhesive, which holds the crown in place, was then set firm using UV light, and once the team was happy with the finished restoration, Cara was taken to recovery where her condition was monitored closely.

Three weeks after the procedure, Cara is eating normally again, wolfing down giant cuts of meat and showing off her trendy new gold fang. Initially, during the recovery period, Cara was put on a special diet to facilitate healing, but now she’s back to munching on meat and gnawing on bones.

This entry was posted on Friday, November 1st, 2019 at 10:28 am and is filed under Animal Dentistry. Both comments and pings are currently closed.