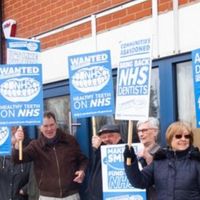 A campaign group, which was formed following the closure of Leiston’s last dental practice, has renewed calls for urgent improvements to access to NHS dental care a year on from the sudden loss of the surgery.

Toothless in Suffolk marched in the town to mark the anniversary of the closure of mydentist’s Leiston branch. When the practice shut, patients were left without an NHS dentist. Just months before, they had a choice of two local surgeries.

Toothless in Suffolk has grown during the pandemic and now has groups nationally, which take part in peaceful protests and marches to raise awareness of access issues and encourage ministers to take action.

Co-coordinator for the group, Steve Marsling, said that one of the main reasons campaigners are taking to the streets is to highlight the weaknesses and shortfalls of the current dental contract, which he believes, do not incentivise extended working hours. Mr Marsling added that dentists are struggling to make money when they work for the NHS and this is prompting them to switch to private services.

The group has called for the government to make NHS dentistry accessible and affordable for all by changing the contract to reward dentists financially.
NHS England has confirmed that new dental practices will open in King’s Lynn and Lowestoft in 2022, but there is currently no new provider for Leiston.

This entry was posted on Wednesday, May 4th, 2022 at 8:21 am and is filed under NHS Dentistry. Both comments and pings are currently closed.