Steven Naismith sets his sights on a different kind of goal 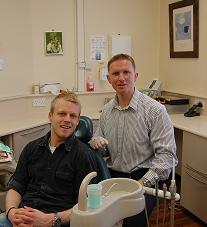 During a week of no matches and rest, while colleagues went off to play for their countries, Scotland striker Steven Naismith took time out to visit Devonshire Dental Care in Glasgow’s West End.

Q: What brought you to the practice at Devonshire?

A: I was recommended to one of the dentists there by John Hillcoat, a family friend and ex-pro, who was happy with his recent treatment.

Q: What were your first impressions?

A: It’s certainly a very nice practice and I was made to feel very welcome. The staff gave it a relaxed atmosphere.

Q: What about your treatment there?

A: I’m quite lucky as I’ve always tried to look after my teeth and didn’t need much done. The treatment that I had was pain-free and straight forward. The whitening options look quite impressive and a visit to the hygienist helped brighten things up a bit.

Q: Would you think about cosmetic work on your teeth?

A: The dentists at Devonshire didn’t push me in that direction, although they can offer pretty much every option including Porcelain Veneers in one day! It might be something I consider later on in life.

Q: What did you think of the Devonshire prices?

A: They seemed pretty affordable and visible to anyone who looks through the website. People who can’t pay for treatment up front are allowed to take other finance options.

Q: Will you be coming back to Devonshire?

A: Every six months or more for a check and a clean. The people there were very decent, making it easier to be positive about sticking with the practice and recommending it to my friends.

Devonshire Dental Care would like to thank Steven for taking the time to answer our questions.

When interviewed recently following appointments at the practice the Scotland striker Steven Naismith was asked if he would consider same day Porcelain Veneers. ‘’My dentist advised me not to have too much done cosmetically right now in case I take an elbow or knock during a game, but the lab at the practice is a fantastic facility.’’

Steven added ‘’This is something I would look at later on when my playing days are over as I was shown some amazing before and after photos of this work. It’s all the more impressive when you realise that you don’t need to walk about with temporary veneers for two weeks.’’

This entry was posted on Friday, April 8th, 2011 at 10:11 am and is filed under cosmetic dentistry, Dental Veneers, teeth whitening. Both comments and pings are currently closed.