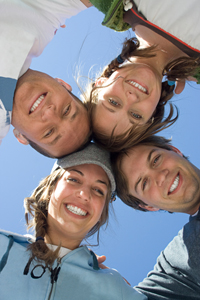 Members of staff from Leeds Dental Institute have downed their syringes in favour of picking up knitting needles in aid of newborn babies in Africa.

The team was inspired by senior house officer, John Ahn, who learned to knit in order to support a very worthy cause. John saw that there was an appeal for warm clothing, including hats and mittens, for newborn babies, who are at risk of developing hypothermia shortly after birth. He taught himself how to knit to donate to the cause and several members of staff have followed suit.

John said that most babies born in Africa are at risk of hypothermia and giving them a hat and a blanket can help to reduce their risk of developing life-threatening infections. John taught himself how to knit using YouTube and then formed a knitting club at the institute to encourage others to help out.

Members of staff from different departments now come together once a week to knit and show off their creations and the team has already knitted a large number of blankets, pairs of mittens, jumpers and hats, which have been sent to Uganda and Kenya. Some of the more adventurous members of the knitting club have also made soft toys and teddy bears.

John also added that many of the team’s friends and relatives are also supporting the cause by donating newborn clothing.

This entry was posted on Wednesday, May 14th, 2014 at 10:40 am and is filed under Charity. Both comments and pings are currently closed.