Smokers and drinkers would be more likely to give up if they knew about mouth cancer risks, poll finds 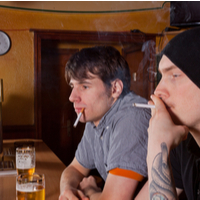 A poll has found that smokers and heavy drinkers would be more likely to quit or cut down if they were aware of the risks of mouth cancer.

In a survey conducted by the Oral Health Foundation and Denplan, 50% of smokers said that they would give up if they knew that smoking increased the risk of oral cancer. Forty percent of heavy drinkers said they would be willing to cut down.

Although the findings of the survey suggest that a large proportion of smokers and drinkers would adapt their habits to cut mouth cancer risks, representatives from the Oral Health Foundation were alarmed at the lack of awareness among these groups. Research suggests that almost 40% of smokers in the UK are unaware of the link between smoking and oral cancer, while 50% of those who drink heavily didn’t know that alcohol increased the risk of mouth cancer.

Stuart Caplan, an ex-smoker who also drank on a regular basis, is working with the Oral Health Foundation to raise awareness of mouth cancer and educate people about the risk factors and causes. A survivor of the disease himself, Stuart decided to share his story as part of 2019’s Mouth Cancer Action Month campaign, which took place in November. Stuart was diagnosed with mouth cancer 6 years ago, despite having quit smoking and drinking a decade ago. At the time, he was given just a 20% chance of surviving 5 years, and now that he has beaten the odds, he wanted to alert others to the risks.

Smoking and drinking increase the risk of developing oral cancer by more than 30 times. According to the latest statistics, more than 8,300 adults were diagnosed with oral cancer in the UK in 2018.

This entry was posted on Monday, January 6th, 2020 at 1:16 pm and is filed under Oral health. Both comments and pings are currently closed.