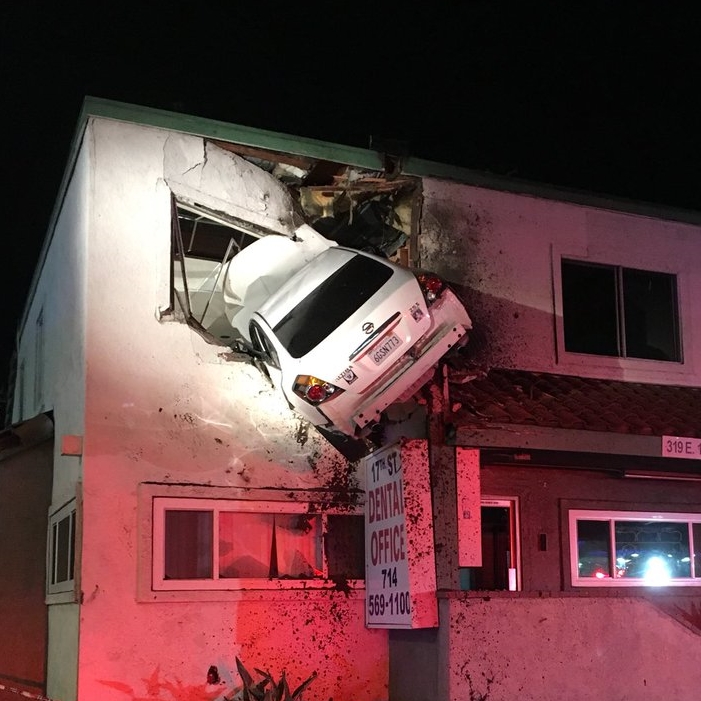 Shocking scenes featuring a car lodged in a dental office window have been captured on camera in California.

Photographs published on news programmes and in newspapers show a Nissan Altima stuck in the first-floor window of a dental clinic in Santa Ana, California. The car is believed to have hit the central reservation on the highway, causing it to leave the ground and hurtle towards the building. The incident occurred on Sunday morning (14th January).

Pictures of the scene, which were shared by the Orange County Fire Agency, show the rear end of the white car emerging from the window on the second storey of the building. Thankfully, nobody was injured and emergency services were able to get those involved to safety shortly after the crash. After the incident, a small fire broke out, but it was quickly extinguished by fire crews.

Representatives from the Santa Ana Police Department claim that car was travelling at high speeds before hitting the central reservation and becoming airborne. Investigations into further causes are now underway and a rescue operation to remove the car and stabilise the building started shortly after the victims had been moved to safety.

This entry was posted on Tuesday, January 16th, 2018 at 4:00 pm and is filed under Dentistry abroad. Both comments and pings are currently closed.