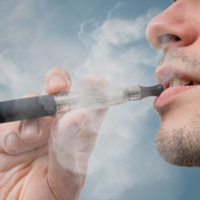 Scientists have issued a warning over the safety of using e-cigarettes. Researchers suggest that using e-cigs can increase the risk of gum disease, and even oral cancer.

Experts from the University of California believe that vaping can damage the surface cells in the gums, increasing the risk of gum disease. Analysis revealed that nanoparticles released by e-cigarettes posed a risk to healthy gum cells located on the top layers of gum tissue. The team noted that damage to the surface cells could increase the risk of both gum disease and mouth cancer.

A team of researchers from Universite Laval, Canada, has also deduced that using e-cigarettes could result in mutations in the gum cells. Their research findings were also supported by scientists from the University of Rochester in New York. Researchers found that flavourings used in e-cigarettes could increase the risk of inflammation and contribute to changes in cell DNA. They also claimed that vaping can damage the connective bone tissue that joins the jawbone to the teeth. Dr Irfan Rahman explained that when vapour is burned, this produces proteins, which increase the risk of inflammation and oral disease.

It is thought that about 3 million people in the UK use e-cigarettes. They pose a problem for health experts, as in many ways, they are a much safer option than cigarettes. However, there are risks attached, and little is known about the long-term impact of regular use.

This entry was posted on Thursday, December 22nd, 2016 at 9:00 am and is filed under Gum disease, Oral health. Both comments and pings are currently closed.