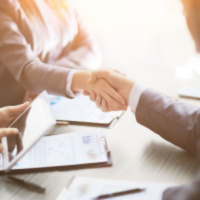 Riverdale Healthcare has completed the acquisition of Hanji Dental Group.

Riverdale now owns almost 60 dental practices and a dental laboratory following the acquisition of Birmingham-based, Hanji Dental Group. Established by Dr Kiran Hanji in 2007, the chain ran 18 dental clinics, including practices in Wellingborough, Loughborough, Nottingham and Market Harborough. The deal is one of the most significant in the dental market in recent years.

The cost of the takeover has not been disclosed. The acquisition was overseen by Christie & Co.

Dr Kiran Hanji said that he was “over the moon with the result” and thanked the team at Christie & Co for working quickly to get the deal done. Dr Hanji said that he had known Jonathan and Tom at Christie & Co for many years and it was a seamless process. Having discussed the sale, the team knew exactly what Dr Hanji wanted and with the help of lawyer, Alex Hall, from Meade King, the sale was completed in just five weeks.

Chris Aylward, chief investment officer at Riverdale Healthcare, which is also based in Birmingham, described the company as a “fantastic group of practices” and added that the acquisition “further strengthens our proposition as a leading provider of dental care.”

The Hanji Group is one of the best independent providers, Mr Aylward stated, and everyone at Riverdale is thrilled to be adding the Hanji dental teams to the business. Mr Aylward also praised the efficiency and speed of all the parties involved in the transaction, including Christie & Co, Mills & Reeve, PWC and Apposite Capital.

This entry was posted on Thursday, August 4th, 2022 at 12:42 pm and is filed under General. Both comments and pings are currently closed.