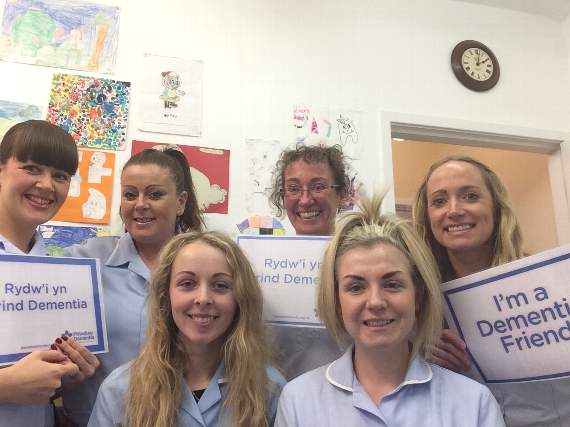 A dental team from Pwllheli is doing its bit to raise awareness of dementia this week as part of a dementia awareness campaign.

The team from Penlan Dental Care has signed up to support an initiative run by the Alzheimer’s Society known as Dementia Friends. This week, dentists, nurses and support staff took part in a one-hour session, which was designed to tell them about the scheme, give them ideas about how to make the surgery more dementia-friendly, and to educate them about dementia and how it impacts individuals and their families.

Principal dentist, Eleri Griffith, said that the session was incredibly useful and informative. Many of the team members have experience in treating patients with dementia, and it’s important that the practice is as well-equipped as possible. Now that everyone understands how dementia affects people, and they have become Dementia Friends, they can set about trying to make life easier for patients with dementia, and offer them the support they need.

Dementia Friends sessions are free of charge, and they are run by the Alzheimer’s Society. There are currently around 45,000 Dementia Friends in Wales and more than 1.7 million in the UK.

This entry was posted on Tuesday, January 10th, 2017 at 5:00 pm and is filed under General. Both comments and pings are currently closed.