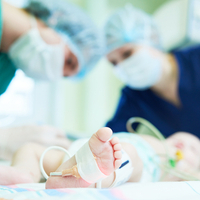 A Prestatyn dental surgery has donated the proceeds of an open day to a local neonatal intensive care unit.

The team at Prestatyn Dental organised the event, which took place on June 22nd, to thank local people for extending a warm welcome to the town. Located in the premises formerly occupied by mydentist, the independent practice opened in February, and the feedback from patients has been hugely positive.

To thank everyone for their kindness, the practice team welcomed patients and local residents to the surgery on Saturday 22nd June, with appointments available at a discounted price of £10 between 10am and 4pm. The proceeds of the event were donated to the NHS charity Awyr Las, which will pass on the money to Glan Clywd Hospital’s Sub-Regional Neonatal Intensive Care Centre.

Business development manager, Iain Donnelly, said that the team has been overwhelmed by the response from patients and local people since the practice opened and they wanted to do something to give back and support a really valuable and important local cause.

To raise funds for the unit, dentists offered consultations for treatments, including composite veneers and cosmetic braces, at a rate of £10. The practice also agreed to match the total raised on the day.

This entry was posted on Wednesday, July 3rd, 2019 at 4:49 pm and is filed under Charity. Both comments and pings are currently closed.