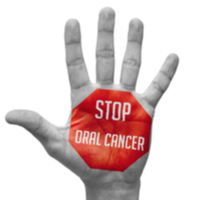 Mr Prabhu, who is based at the Churchill Hospital in Oxford, was invited to speak at Townlands Memorial Hospital as part of a series of free talks organised by The Bell Surgery in Henley.

Oral cancer is now the ninth most common form of cancer in the UK, and it kills around 2,000 people every year. Despite its growing prevalence, public awareness of the causes and symptoms remains poor, and this means that most cases are diagnosed at an advanced stage.

Mr Prabhu outlined the main risk factors, including smoking and excessive drinking, and also provided detailed information about the treatment options that are available to patients with mouth cancer. The aim is to manage symptoms and to maintain the highest standards in terms of quality of life after treatment.

Joined by local dentist, Rebecca Sadler, Mr Prabhu stressed the importance of being mouth-aware and of attending regular routine check-ups. Ms Sadler, from Courtrai House dental practice, explained that dentists carry out oral cancer checks as part of routine examinations. Dentists are also trained to spot early warning signs, such as slow-healing ulcers, red or white patches in the mouth or throat, abnormal swelling and lumps.

Janet West, a patient treated by Mr Prabhu, also shared her story. Janet told the audience about her diagnosis and treatment journey, and also spoke about the work she is now doing to raise awareness of oral cancer.

The next talk, which will be on Dermatology, will take place on Tuesday 25th February.

This entry was posted on Wednesday, February 12th, 2020 at 4:55 pm and is filed under Oral health. Both comments and pings are currently closed.