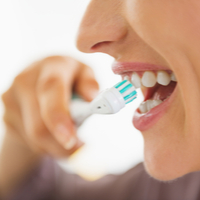 A new survey has revealed that 1 in 5 Brits don’t brush their teeth twice a day.

The poll, which involved 2,000 adults, also showed that only a quarter of adults floss and a third of people have let their oral hygiene slide during the pandemic. Of those surveyed, 22% of people have gone for three days without brushing before and almost a quarter have not seen a dentist in the last 12 months. The survey was carried out via One Poll.

Dr Alex George, who is working for Colgate as part of a new initiative to raise awareness of the importance of oral health, said, “Your mouth is a gateway to your overall health.

Issues such as gum problems have been linked with health issues including diabetes, cardiovascular disease, respiratory disease and even dementia- which is why it’s so important to include looking after your mouth as part of a wider health routine.”

Colgate’s #Happy Habits campaign is all about taking simple steps to protect the teeth and gums and lower the risk of dental disease. The One Poll study showed that a third of adults are unaware of the potential impact of poor oral health in terms of general health conditions, but a quarter admitted that they would devote more time and energy to brushing now that they are aware of the link with life-threatening conditions.

Research conducted by Colgate showed that 82% of dentists noticed a decline in oral health among patients during the pandemic. Almost all of the 45 dentists surveyed said that common oral health issues, including toothache, sensitivity, mild gum disease and plaque build-up, had become more common.

This entry was posted on Wednesday, January 12th, 2022 at 9:30 am and is filed under Oral health. Both comments and pings are currently closed.