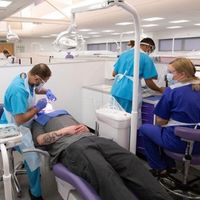 A new dental scheme run by Portsmouth University is providing a “lifeline” for homeless people in the city.

The university’s dental academy has been offering free dental care for local people living on the streets as part of a programme to support the community and provide experience for trainee dental nurses, dental therapists and hygienists.

For a period of four weeks, the academy offered free sessions at the state-of-the-art treatment centre in the William Beatty Building in Hampshire Terrace. During the Wednesday afternoon clinics, over forty local people benefited.

One of the patients described the clinic as a “godsend.” Barry Wilson, 46, has been on the streets since 2015 when his marriage broke down. He moved from one “chaotic” hostel to another while trying to battle addictions to alcohol and drugs.

Barry suffered from extensive dental problems and said that he was ignored until he came to the clinic, where he was “treated like a human being.” He added that he feels so much more confident when he’s with the team at the academy and said that there was no judgment, just kind, caring people who wanted to make a difference.

The scheme was set up by clinical teaching fellow, Janani Sivabalan, who wanted to try to highlight barriers homeless people face when trying to access dental care. Previous initiatives have shown the team that there is a demand for treatment among the homeless community, but when the sessions were first advertised, few people came forward. Janani made it her mission to increase numbers and encourage people to take advantage of the free dental services.

Janani described the experience as an “emotional roller coaster” for many of the patients who attended the clinics and the students providing care.

There have been tears and the outreach programme has made a huge difference. Barry said that the clinic was a “lifeline” for him, and Naomi Shuff, a third year dental hygiene student, described the experience as “fantastic.”

This entry was posted on Monday, January 10th, 2022 at 9:23 am and is filed under Charity. Both comments and pings are currently closed.