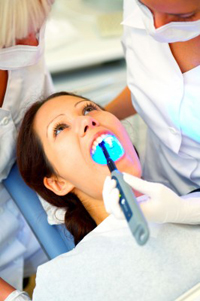 Dr Nigel Carter OBE, chief executive of the British Dental Health Foundation, has issued a warning to the public over illegal tooth whitening.

Dr Carter was speaking in light of the publication of survey figures, which revealed that more than 1 in 4 people would not go to a dentist for whitening treatment, preferring instead to choose cheaper treatments provided by beauticians and non-qualified practitioners working at kiosks in shopping centres and other leisure facilities.

The survey, which was carried out by Atomik Research on behalf f the British Dental Health Foundation, also revealed that 25 per cent of people believe that beauticians and kiosk staff have the relevant qualifications and training to provide whitening treatment.

Dr Carter said that beauticians do not have the relevant training and expertise to provide whitening treatment and as most treatments involve the use of hydrogen peroxide, which can cause damage to the teeth, members of the public are putting their health at risk by choosing not to see their dentist for treatment.

The survey was carried out as part of National Smile Month, an annual campaign, which is run by the BDHF to raise awareness of the importance of regular dental visits and good oral hygiene.

This entry was posted on Wednesday, June 5th, 2013 at 10:14 am and is filed under teeth whitening. Both comments and pings are currently closed.