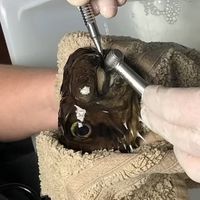 Vets in Kent have successfully treated a pufferfish who was at risk of starving. The team at Sandhole Veterinary Centre trimmed Goldie the pufferfish’s teeth to enable her to eat.

Goldie, a porcupine pufferfish, needed treatment to reduce the size of her teeth after her owner noticed that she wasn’t eating properly. Mark Byatt, from Leybourne, took his pet fish to the vet and it was agreed that a procedure would take place to shave one of the upper teeth.

Vet, Daniel Calvo Carrasco explained that porcupine pufferfish have teeth known as beaks, which grow continuously. Usually, the teeth are worn down naturally, but in Goldie’s case, one of the upper beaks had grown so long that she was unable to eat.

Goldie was brought into the practice in Snodland in a large, sealed container, which contained water from her tank at home. A mild anaesthetic was added to the water to prevent Goldie from experiencing any pain during the procedure. Vet nurse, Debbie Anderson, held the fish gently in a damp towel once the anaesthetic had taken effect.

This prevented Goldie from drying out or going into a defensive position, which causes pufferfish to double in size. While Debbie held the fish, Daniel used a burr to gently shave away the tooth tissue, reducing the size by 50%.

After the procedure, Goldie was monitored by the team before heading home with the owner, Mark. Daniel said that the procedure went “swimmingly” and Goldie was quickly back to herself and eating well.

This entry was posted on Thursday, January 27th, 2022 at 9:30 am and is filed under Animal Dentistry. Both comments and pings are currently closed.