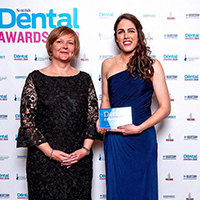 An Inverness dentist has plenty to smile about after being crowned Scotland’s Young Dentist of the Year.
Jane Hier, 29, who is also a lifeboat volunteer, beat off stiff competition from all over the country to claim the title at the Scottish Dental Awards.
Jane was commended for her attitude and clinical skills, but it was her commitment to working with nervous patients and children that separated her from her competitors in the eyes of the judging panel. Jane has worked at Torwood Dental Practice since she graduated in 2012, and she is an incredibly important and popular member of the team, according to her colleagues.
Jane collected her award at a ceremony in Glasgow, which was hosted by comedian, Fred McAuley. In her acceptance speech, which she was advised to limit to just 3 words by the funny-man, Jane took the liberty of using 4 and simply said, “I love my girls” in tribute to her workmates who were sitting at the table with her.
The rest of the Torwood team also had something to celebrate, as they were short-listed for the Dental Team of the Year Award.

This entry was posted on Friday, May 10th, 2019 at 4:24 pm and is filed under Dental Awards. Both comments and pings are currently closed.