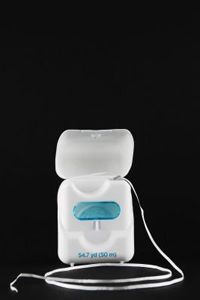 A controversial new book has claimed that flossing, a practice that dentists usually promote tirelessly, is useless.

Dr Phillips recommends using Ultradex mouthwash after eating to wash away bacteria; this should be followed by a regular mouthwash, such as Listerine, after brushing and then Fluorigard to protect and strengthen the teeth. Dr Phillips also recommends chewing gum that contains Xylitol, a natural ingredient, which has been proven to reduce the risk of decay.

Dr Phillips’ observation sounds absurd when you consider that dentists have been promoting regular flossing for many years; however, there is little research evidence to support the fact that flossing reduces rates of decay.

Some dentists believe that flossing has not been shown to be effective in the fight against decay because people do not know how to floss properly.

The UltraDEX team are pleased that our products are mentioned in the article above. However, whilst the UltraDEX Oral Rinse can be used as a pre-rinse, the clinically proven formula has not been specifically developed for this purpose and can be used as a general daily mouthwash either before or after brushing. Backed by extensive research, regular use of the alcohol-free UltraDEX Oral Rinse provides exceptional oral care, fresh breath confidence and whiter teeth. We, as an oral healthcare company, believe that advanced interdental cleaning is an integral part of a regular oral health care regime, whether using interdental brushes or floss. Correct interdental cleaning helps to remove bacterial plaque, biofilm and organic debris above and below the gum line and helps to maintain good periodontal health. For further information, please visit our website.

This entry was posted on Monday, November 26th, 2012 at 11:31 am and is filed under Gum disease, Oral health. Both comments and pings are currently closed.