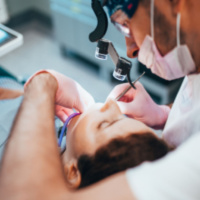 A woman from Cirencester said that she was forced to file her own teeth after struggling to get a dental appointment.

Isobel Sadler chipped her tooth on Sunday July 24th but was informed that she would have to wait until the end of October to see a dentist. When she called her local practice, she was told that there were no appointments available until October 26th. Even though she had a routine check-up booked before October, she was told that her dentist would not have time within that appointment to fix the tooth.

As the tooth was pressing against her tongue and causing discomfort, Isobel felt that she had no choice but to file it herself. Isobel said that she couldn’t afford to pay for private treatment, which could cost up to £150 for a procedure that would only be £20-£30 on the NHS.

Isobel is one of thousands of patients around the country who have resorted to DIY dentistry as a result of a shortage of NHS appointments. She said that it’s no wonder that people are waiting. At her practice in Cirencester, there are only two dentists and it’s the main NHS surgery in the town. She added that she doesn’t blame the dentists or the owners of the practice, who can’t recruit more staff.

This entry was posted on Wednesday, August 3rd, 2022 at 8:22 am and is filed under Dental Access. Both comments and pings are currently closed.