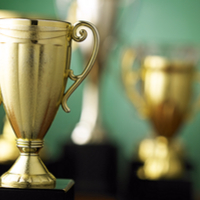 Christmas has come early for a dental team from Swadlincote, after they were awarded two gongs at the prestigious National Dentistry Awards.

The team from Alexandra Dental Care was crowned the winner of the Best Practice award, while Lorraine Hampton walked away with the award for Best Team Member. The glittering awards ceremony, which is a highlight for practices all over the country, took place at Athena in Leicester.

Practice partners, George Savva and Yogi Savania said that it was a great honour to receive the awards, which are coveted by professionals across the country. The team has worked incredibly hard over the last year, and their efforts have clearly paid off. To win two awards is an amazing achievement, and everyone is delighted. This year marked the 20th anniversary of the partnership, so this was a perfect way to round off a memorable year.

Success at the National Dentistry Awards comes just months after staff celebrated the accolade of Best Team at the 2016 Dental Awards.

Zoe Sharp, from the practice, commented that it has been a fantastic year for everybody involved with Alexandra Dental Care, but nobody was getting complacent, and the team has already started discussing plans to improve next year. There are hopes to invest in new technology and to complete renovation work to create additional surgery space.

This entry was posted on Wednesday, December 21st, 2016 at 9:00 am and is filed under Dental Awards. Both comments and pings are currently closed.