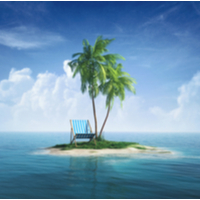 A daring dental nurse from Cavendish made her TV debut in Bear Grylls’ Treasure Island over the weekend.

The first episode of the new series aired on Channel 4 on Sunday 8th September. Emily Webster, a mum of two, decided to apply for the show after seeing the celebrity version. When applications opened, she joked to her partner that she was going to put her name forward, and he laughed, which made her even more determined to get on the show.

Emily, a dedicated mum and hard-working dental nurse, said that her life tends to revolve around work, looking after her kids and spending time with her husband, and she suggested that the idea of being alone on an island with only herself to worry about was appealing. Describing herself as a “pampered princess,” Emily admitted that her first concern was getting her hair wet, but she soon got used to braving the elements, switching to survival mode.

During the ordeal, Emily said that the biggest struggle was not being able to wash properly, but she managed fine on a restricted diet.

Emily was one of 12 contestants marooned on a remote island in the Pacific Ocean for 35 days. The series will run until October 6th.`

This entry was posted on Tuesday, September 10th, 2019 at 4:30 pm and is filed under General. Both comments and pings are currently closed.