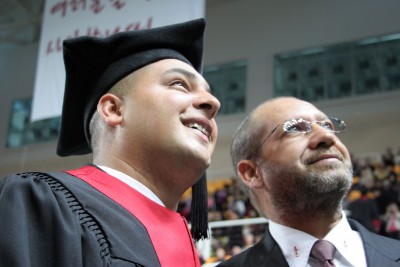 The dental school opened in 2008 and the first class to complete the course have now graduated, marking a landmark achievement. The James Cook school is one of just three located outside of state capital cities.

Professor Andrew Sandham said that it was important to open a dental school in the North of Queensland where there was a shortage of dentists and the decision is already set to pay off, as many of the graduates are planning to stay and practise in the local area.

Professor Sandham added that it was well-documented that there were long waiting lists in the region and the recruitment of new dentists is a major bonus for the area.

The class of 53 newly qualified dentists is now looking forward to the world of work and Professor Sandham is confident that every single dentist will make a difference. He is hugely proud of the school and the achievements of the graduates and said that it was amazing what had been achieved in the last six years.

CJ Richter and Declan Collins are two young dentists heading to remote areas to start their professional careers. CJ said that he was looking forward to the challenges of rural practise, while Declan explained that he is looking forward to making a difference to local people. Even during their time as students, the class helped to slash waiting lists in rural towns and they are confident that they can really make a difference now that they are fully qualified.

This entry was posted on Tuesday, December 17th, 2013 at 12:38 pm and is filed under Dental Graduate. Both comments and pings are currently closed.