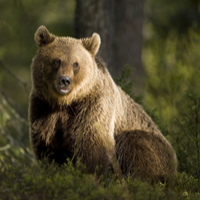 A British vet has been called upon to provide dental treatment for a brown bear freed from captivity in a private zoo in Armenia.
Paul Cassar, from Chichester, recently flew out to Yerevan in the former Soviet Union to provide dental treatment for a giant brown bear who now goes by the name of General. General is currently residing at Yerevan Zoo after being rescued from a private zoo owned by a former military leader and politician. General was found in a torrid state by representatives from British-based charity, International Animal Rescue.
Paul has treated more than 150 bears during his long and illustrious career, and he is a long-term supporter of the charity. General, who weighs 30 stone, is a slightly different proposition to Paul’s usual clients back in the UK, but working with the charity is something that brings Paul a great sense of satisfaction. International Animal Rescue is working to free bears that have been kept as pets and those trained to work as dancers and entertainers, and Paul is often drafted in to provide pain relief, extract decayed teeth and treat dental infections, which tend to be rife in captive bears.
Paul was assisted by a team of vets from the charity and dental nurse, Charlotte Callaway-Goldstone. Charlotte said that the procedure to extract rotten teeth is a little more complex than treating humans, as the bone tissue is a lot stronger and more resilient, but stressed that General had been cared for in exactly the same way as Paul’s patients back in West Sussex.
General will now be cared for by the charity. He will be released into a reserve when he is fit and strong enough.

This entry was posted on Tuesday, January 15th, 2019 at 9:52 am and is filed under Animal Dentistry. Both comments and pings are currently closed.