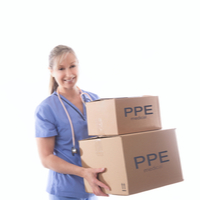 The British Dental Association has warned that a delay in delivering PPE to practices in Northern Ireland will affect services.

Around three million units of PPE were due to be delivered to dentists in Northern Ireland this week, but there has been a delay, which means that stock won’t be distributed until the 20th July. The BDA has suggested that the delay will disrupt the planned restoration of routine dental services, including fillings, which are currently scheduled to begin on the same day.

The Department of Health admitted that the logistics of organising such a vast supply of PPE had been “significant” and stressed that everything was being done to provide dental teams with the PPE needed to treat patients as quickly as possible.

Robin Swann, the Health Minister, had revealed that the shipment was due to be delivered this week, but there have been delays, which mean that practices won’t start receiving units until Monday 20th July. A spokesperson for the Department of Health explained that the delivery contained items that will be distributed to around 340 practices, which represents major challenges.

Tristan Kelso, from the BDA in Northern Ireland, said that the setbacks in providing practices with PPE will “absolutely delay” treatments at a time when backlogs are building every day.

Dentists in Northern Ireland have been able to offer patients routine services since the 29th June, and it was hoped that patients would be able to access an extended range of treatments, including AGPs (aerosol-generating procedures), from the 20th July. These treatments carry a higher risk because they generate and spread droplets, and therefore, additional PPE is required.

This entry was posted on Thursday, July 16th, 2020 at 11:18 am and is filed under Coronavirus. Both comments and pings are currently closed.