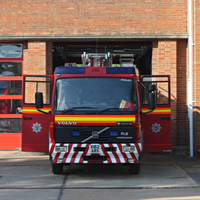 A dental clinic in Bognor Regis has been forced to close following a fire that broke out on Wednesday 28th August.

Fire crews were called to Bupa Dental Care Bognor on Belmont Street, and two engines attended the scene. Nobody was injured in the fire, but the firm was forced to close the practice, with no date currently confirmed for the reopening.

Firefighters arrived at the scene just after 11am and two crews used high-pressure hose reels, a fog nail and a safety jet to bring the flames under control and minimise damage to the internal and external structures of the building. Crews were at the practice for around 2 hours, taking time to damp down the premises and using a thermal camera to check for any remaining hot spots.

Bupa’s regional operations director, Raphael Rashid, confirmed that a fire had broken out at the Belmont Street clinic and said that the site would be closed for the foreseeable future to repair damage and ensure that the surgery is safe and clean ready for patients to return. Patients have been informed, and those who have appointments booked have been encouraged to contact Bupa’s sister practices in Wick and Rustington while the Bognor clinic is closed.

This entry was posted on Thursday, September 5th, 2019 at 4:30 pm and is filed under General. Both comments and pings are currently closed.