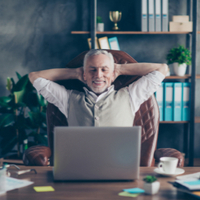 A dentist from Bingley has officially hung up his drill after treating patients for 54 years.

At the age of 78, David Pulman was one of England’s oldest working dentists when he retired in June. David has spent the last 46 years working at Park Road Dental Practice, and he reluctantly decided to retire after the Coronavirus hit. At the beginning of the year, Mr Pulman paid his license fee, and he was expecting to continue treating patients for at least another year. Unfortunately, the outbreak and subsequent lockdowns have altered his plans, and he has decided to down tools and start his retirement.

Mr Pulman worked for eight years and spent time in Australia before buying his own practice in Bingley almost 50 years ago. For the last five decades, he has treated local patients, becoming an integral member of the community and enjoying watching families grow and dentistry evolve.

Mr Pulman had considered retiring this year, but said that he was willing to continue because he loved his job so much. When the pandemic hit, and practices were closed, he decided that retirement could be an attractive proposition. The lockdown made him realise that there was a benefit to having time off to enjoy the sunshine in the garden and relax, but he wasn’t completely convinced. When the Prime Minister announced that practices could reopen at the beginning of June, he did take a moment to consider whether he wanted to get back into the swing of work, but the ‘new normal’ didn’t seem so appealing.

Mr Pulman said that he will miss his patients and the staff members, some of whom have been working with him for 20 or 30 years, and thanked everyone for their well-wishes.

This entry was posted on Thursday, August 27th, 2020 at 1:09 pm and is filed under General. Both comments and pings are currently closed.