Americans Need To Brush Up On Oral Health 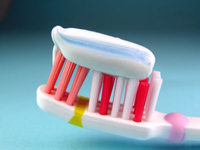 A survey has revealed that Americans need to brush up on their oral health knowledge.

The survey, which was conducted by the American Dental Association, showed that the average American has poor knowledge of oral hygiene, with the average score revealed as a ‘D’.

Dr Ada Cooper, a spokeswoman for the ADA, said that the association is hoping that the results “set a low bar”.

The results of the survey were released by the ADA in conjunction with the launch of mouthhealthy.org, a site designed to provide information about oral health for people of all ages.

According to the survey results, 90 percent of adults believe that they should brush their teeth after each meal; however, the ADA suggests brushing the teeth just twice a day, once in the morning and once in the evening. Sixty-five percent of people also believed that they should change their toothbrush every six months; however, the ADA suggests swapping brushes every 3-4 months.

Three quarters of people surveyed said that they did not know when they should take their child for their first dental appointment and more than half of people said that you should floss twice a week, rather than once a day as recommended by dentists. The ADA advises parents to take their children for regular dental visits from the age of 12 months old.

This entry was posted on Tuesday, July 17th, 2012 at 9:31 am and is filed under Dentistry abroad, General, Oral health. Both comments and pings are currently closed.