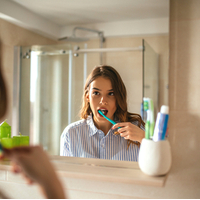 A new survey suggests that more than a quarter of British adults don’t brush their teeth twice a day.

A poll conducted by Simplyhealth revealed that 27% of people don’t brush twice-daily, and a third don’t floss. More than 40% of employees said they had taken time off in the last 12 months as a result of dental emergencies, with the average person losing the equivalent of almost an entire working day.

The Consumer Oral Health Survey also showed that the majority of people know that their oral health is important, but most are unaware of the impact of poor oral health on general health. More than 75% of those surveyed said that they were aware that oral health had a significant impact on general wellbeing, but only 20% knew about the link between gum disease and heart disease, and just 13% were aware of the connection between dental health and type 2 diabetes.

As well as missing valuable working hours to attend urgent dental appointments, the survey also revealed that parents were taking time out of the office to take their children to the dentist. More than half of employees admitted to missing work as a result of their child needing emergency dental treatment.

Director of corporate at Simplyhealth, Pam Whelan, said that it’s crucial for employees and employers to be mindful of the benefits of preventative dental care and to take steps to keep oral diseases at bay. Employees can reduce their risk of needing time off by maintaining good dental hygiene and seeing their dentist on a regular basis, while employers can support the cause by offering dental payment plans as part of an employee benefit package. These plans are designed to make it easier for staff to access either NHS or private dental treatment.

This entry was posted on Tuesday, July 2nd, 2019 at 9:31 am and is filed under General. Both comments and pings are currently closed.